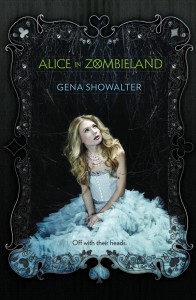 I honestly couldn’t wait to get my on this novel and I’m glad that I finally did.  This was such a fabulous novel that I just couldn’t put it down.  The first little bit about Alice in the beginning said so much about this novel that I had to keep reading it.  Once I did I couldn’t let it go. Literally, I couldn’t and I had to at work by 6 am the next morning.  I barely got any sleep because I wanted to finish reading this novel.  The boys in this novel are all so dreamy in a way that makes me want to be a part of their world.  This sounds weird to me too, but it just goes to show how much I loved this novel.  In this novel Alice loses her family to some strange people.  Alice and her sister Emma wanted to go to Emma’s ballet recital.  Alice’s dad never lets them out after dark and even built there house into a fortress.  On the way back from the recital Alice’s father proceeds to grab the car wheel and flip the car over.  Everyone but Alice was killed, leaving Alice to wallow in her own grief.  After the accident Alice was left to live with her grandparents and made to go to the same school that her parents had gone to.  Everything is going okay for her at first, until she sees a boy that gives her visions of their future.  This boy’s name is Cole and just like Alice herself he can see the monsters that come out at night.  Cole it trained to kill these monsters and to help send their souls back to where they belong.  Once Alice finds this out there’s no stopping her from getting what she wants.  On the team that Cole himself runs.  Alice feels like she needs to redeem herself from surviving while her family died.  She wants to kill as many monsters as possible, so that nobody has to go through what she did.  However, it seems that the monsters have a different idea entirely.  They’ve started to hunt someone, and that someone seems to be Alice.  They’re coming out of the dark earlier and earlier, and will stop at nothing to get to her.  This really was a great novel and I’m super glad that I got to read it.  This novel puts a whole new twist on the Alice in Wonderland novel.  It’s a story that can terrify you, excite you, and show you want young love is all about.  This is a novel that needs to be reread over and over again just because it’s that good.  The plot to this novel puts a new spin on it, which is quite refreshing in its own way.  The adventure in this novel is spread put so that you’re hooked to it for the whole day.  You definitely don’t want to put this novel down, because it lingers in the back of your mind.  This novel is a great choice for young adult fans and maybe for some urban fantasy readers as well.  I would recommend this novel to anyone that likes an even darker twist to their favorite Alice in Wonderland novel.  It is certainly quite the read, and it’s most definitely worth your time.