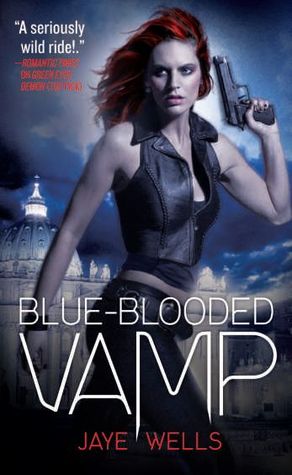 Ah, all the things that I could say about this novel, yet no time to say it.  As far as the final novel in this series goes, it wasn’t that bad of a read.  I actually spent the better part of my day reading through this one.  The fact that I had actually kept putting it off, for some odd reason, is mind boggling and I can’t say that it was a wise choice.  In this novel Sabina’s sister is dead.  She died at the hands of Cain and forever left her mark on Sabina.  The mark being the start that was once on her shoulder, which now rests on Sabina’s other shoulder.  Sabina is in a deep depression, but she has to get over it quickly if she wants to save all of the races in the world.  To stop the war that’s coming between all of the races she needs to find Abel, a man that’s said to know all about Cain and how to stop him.  To do this she needs to gather up her small group/army and head over to Italy.  All was going according to plan until a God, who she’d recently asked for help, tells her that she has to find a vampire named Nix and kill her.  The best part about this is that Nix is wearing a vest, given to her by the same God, that won’t let her be killed.  The real kicker is that Cain is now hunting Sabina, so that he can have her make a pathway to his sweet Lilith.  Whom he’s very obsessed with to the point of crazy stalkerish.  The icing on this particular cake, for me anyways, is who the mysterious Abel actually turns out to be.  This novel just has a lot going on in it and it can get down right confusing at certain points, but that doesn’t make it any less exciting either.  I certainly admire the plot of this novel, but I do feel like some of the twists could have been played out a little better, so that it wasn’t as confusing as it really was.  The action in this novel was extraordinary and it had me gripping the novel in anticipation of what was to come.  This is what I believe truly matters I a novel and Jaye Wells did a wonderful job in supplying it.  The main character and her lover were kickass, while her demon sidekick helped lead the way.  It was so entertaining at times that I lost track of the time and forgot that I had things to do.  All of the action is so hard to ignore, even when your stomach is growling and your throat starts to dry up.  I suppose that it is one way to diet, however I wouldn’t recommend it.  Reading this novel is something that I do recommend, because you’d absolutely love it.