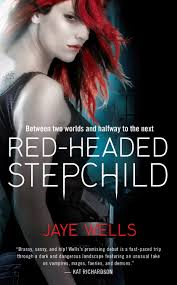 When I first saw this novel I wanted to read it very badly, so I put it on my list.  However, by the time I got to it I had decided that it wouldn’t be worth it.  I’m very glad to say that I was wrong at this point in time.  I was so wrong to send this novel back the first time and I regret it too.  The second time that I came across this novel I took it home and read it right away.  The cover of this novel actually helped me make this decision.  From the cover I took this to mean that there might be a lot of action in this novel, and since I’m a sucker for bad-ass chicks I thought that this would be the perfect novel for me.  The main character in this novel is Sabina Kane and she’s a mage/vampire hybrid or mixed blood.  This makes her very unique since she’s the only one of her kind.  It’s also forbidden for any of the dark races to breed outside of their own species, so this also makes her an outcast.    Sabina tries to do anything within her power to make it look like she’s all vampire to other of her kind, because of how badly she wants to be normal.  So when Adam Lazarus comes into the picture it isn’t pretty.  Adam is a mage that was sent to find Sabina and to test her will.  He looks and acts like a carefree bad-ass, but he’s also someone that you’d want on your side in a fight.  When worst comes to worst, and he thinks you’re in the wrong, he can turn on you in a jiffy if need be.  Now in this novel Sabina starts out digging a grave, when another vampire poofs up behind her.  She knows that he’s there and also that she needs to kill him.  Sabina is an Enforcer, or an assassin if you will, and when she’s ordered to kill somebody she does it without a complaint.  This can be rather hard on her when she has to kill people that she knows and respects.  However, if she doesn’t do what she’s been created to do, then her grandmother would have no use for her.  The first chapter in this novel caught my attention like no other.  I was very impressed with it and was very happy to have chosen this novel.  This novel hooks you in and doesn’t want to let you go for anything.  I hardly put it down once I actually started to read it and I’m very glad for this.  This is a very good novel with an even better plot twist at the end.  It will leave you wanting more action, edgy plots, and of course more Sabina Kane.  I would recommend this novel to many people but especially for those of us who love a kick-ass heroine with a bad attitude.