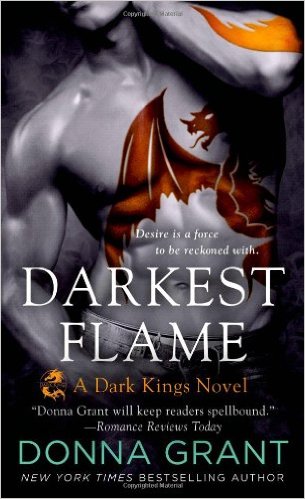 It’s not that I find Donna Grant’s novels to be a slow and boring read, honestly. It’s just that they’re so complex that it makes it a slow read. Even if the plot is trying to be fast-paced it’s just not. That’s usually a major turnoff for me in a series. However, I happen to like the plot too much in this case. So I went ahead and read it anyways. This seems to be the case with all of Donna Grant’s novels. They’re all slow reads, but the plots drag me forward way too often. Which I was okay with for this novel.

In this novel the unsuspecting human is Denae and the dragon king is Kellan. Denae is an operative in the MI5. One that’s not known about to the public. However, the public now knows about her thanks to the last mission that she was sent on. A mission that she wasn’t supposed to survive, because her own team had set her up. Denae and a fellow MI5 operative went on a mission to report on what was in a cavern. The cavern that they’re to look at belongs to very powerful people and all Denae is told is that they’ve been corrupted. While in the cavern Denae is attacked by her teammate and she ends up killing him. During the attack they had unknowingly woken up Kellan. Kellan had been sleeping for hundreds of years and doesn’t take it kindly when he’s been woken up. However, this time something interesting has caught his attention. A female and a male are fighting in his cavern, and the female appeared to be winning. After the fight is over Kellan feels the need to contact the other kings, to inform them of Denae. After the King of the Dragon King’s sees her he decides that she may be dangerous and that Kellan has to watch her. Upon finding herself in a strange place surrounded by strange men, Denae comes to realize that she’s been set up. For some reason the MI5 want her dead and she’s afraid they’ll do anything to make that happen.

This novel is without a doubt an urban fantasy romance novel. I mean seriously, there’s no way that it can be anything else. The fact that the main character is a dragon tells us all that we need to know. However, this doesn’t imply the plot. The plot could have went two different ways in my opinion. Neither of which I’m going to tell, because I don’t want to ruin the novel. This novel did have a few surprises in it that I didn’t anticipate. This made it a little more interesting to read, but also a little confusing. Because of the surprises a lot of information was learned all at once. So it was a bit confusing in certain areas. However, with all this being said I’d still recommend this novel. It’s an interesting read and puts a new perspective on things. So if you’re interested in a different kind of urban fantasy novel, this is the one for you.