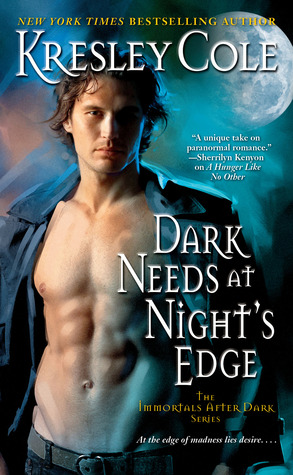 I actually enjoyed this novel more than I thought I would. It’s one of those novels were you’re not giving any information on, and it usually doesn’t turn out too well. However, in this case I couldn’t take my eyes off of it. The only reason I had to was because I had to work the next day. Otherwise this novel would have been read in just one day. That’s just how good I thought this novel truly was. It’s actually one of the best in the series so far.

Naomi is a ghost. One that has been haunting her beloved home for over eighty years. But Naomi wasn’t always like this. There was a time when she was a successful ballerina. She worked her butt off for the house that she now haunts. But sadly her life was ended quite tragically. Leaving her to watch as her house was constantly sold over and over again. This includes watching as three hot men dragged another hot man into her house in chains. Which proves to be the most entertaining part of her undead life. Conrad is a very bad vampire. He’s one of the only men who can take on a lyake in beast mode. Proving that not only is he tough but that he’s insane as well. Which is also proven by the red in his eyes. Conrad is one of those vampires that drinks their victims to death. In his line of work it’s the easiest way to make sure that somebody is truly dead. However, it comes with a cost. One that is starting to make him hallucinate about a ghost named Naomi. Only he’s not imagining her and he soon realizes it. Once he’s come to terms with the fact that he’s the only one who can see her he slowly starts to get better. Naomi is fascinated by Conrad and is thrilled that he can see her. She’d have given everything for others to see her as well. Which is exactly what Conrad plans to do. Even if it means hurting himself.

This novel would be classified as another wonderful adult urban fantasy novel. It goes right along with this series perfectly. And it even has all of the different aspects to prove it. There’s tension, drama, fighting, passion, drama, and of course ghosts to top it all off. Making this a novel that anyone can find interesting. The plot of this novel is one that we normally don’t expect, but that fits right in anyways. It has a wonderful plot twist, and the characters are exactly what this novel needed. Making it a perfect novel for a perfect series. So as far as my recommendation goes, I’d say that this is definitely a must-read novel. It’s one that will keep you entertained all day, and maybe even all night. It certainly won’t disappoint you, so I’d hurry up and go pick it up at your nearest bookstore.