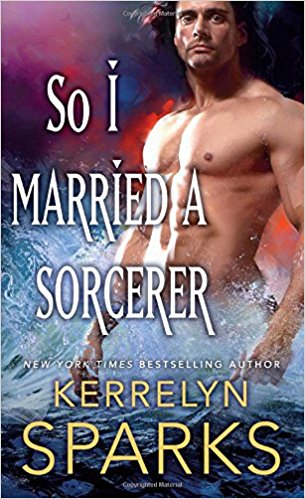 Oh my God, I loved this novel! Even more so the last one, if that’s even possible. Which it must be because I absolutely did. It had me hooked from the very first chapter, and once I was hooked I was a goner. For this novel had something that I’ve been missing for a very long time now. An Kerrelyn Sparks finally gave it to me. Thank the Lord for that.

Brigitta is starting to regret her decision to cross the ocean. The only reason that she decided to was because of her sisters. They all want to see Luciana very badly, and so does she. But with her fate so close to her, she’s starting to wonder if she’s made the right choice. For fate can be a scary and fickle thing at best, and Brigitta’s fate could be even worse. Especially with the dread pirate Rupert on her trail. Because Rupert wants to kidnap her for his own personal gain. And to use her against her very own brother, for everything that was done to his family. A brother that Brigitta had never even knew she had, and she’s not even sure that she wants to meet him. Especially since he told his captain- of his fleets- to do anything to bring her back. Even if it means forcing her against her will. But as luck would bring it Rupert’s ships arrive at the exact same time as her brothers. And when they start to threaten the lives of her sisters there’s only one choice to make. A choice that changes her fate for the better. Because she’d rather go with the pirate, to save her sisters, then to go with her brother’s captain. An after meeting Rupert it’s clear to her that he’s not what he seems. He’s mysterious and aloof, but he’s also making sure that she’s being properly cared for. Which seems rather odd to her. Especially, since he’s the same pirate who has been terrorizing her brother’s country. But despite all that, Rupert now has a hard choice to make. Because word has reached him of what Brigitta’s brother really plans to do with her. And even though he hates the man with a passion, he refuses to let her go to that fate.

This novel can be found in the adult romance section of any bookstore. However, it could also be said that it could be found in the urban fantasy section as well. This is because it’s full of people with unnatural amounts of power. It could almost be said that it’s a novel about witches, dragons, and fae alike. But what’s really catchy is the twist that’s within the plot itself. Even though it’s one that I saw coming halfway through, it still had me completely captivated. Meaning that this novel is going to get a very good recommendation from me. For this series is certainly one of a kind, and this novel is no different. It’ll get any urban fantasy lover in a tizzy over it. So I highly recommend that you go and buy this book today. Because it will definitely keep you entertained for a long time.